Round to forget, ride to remember 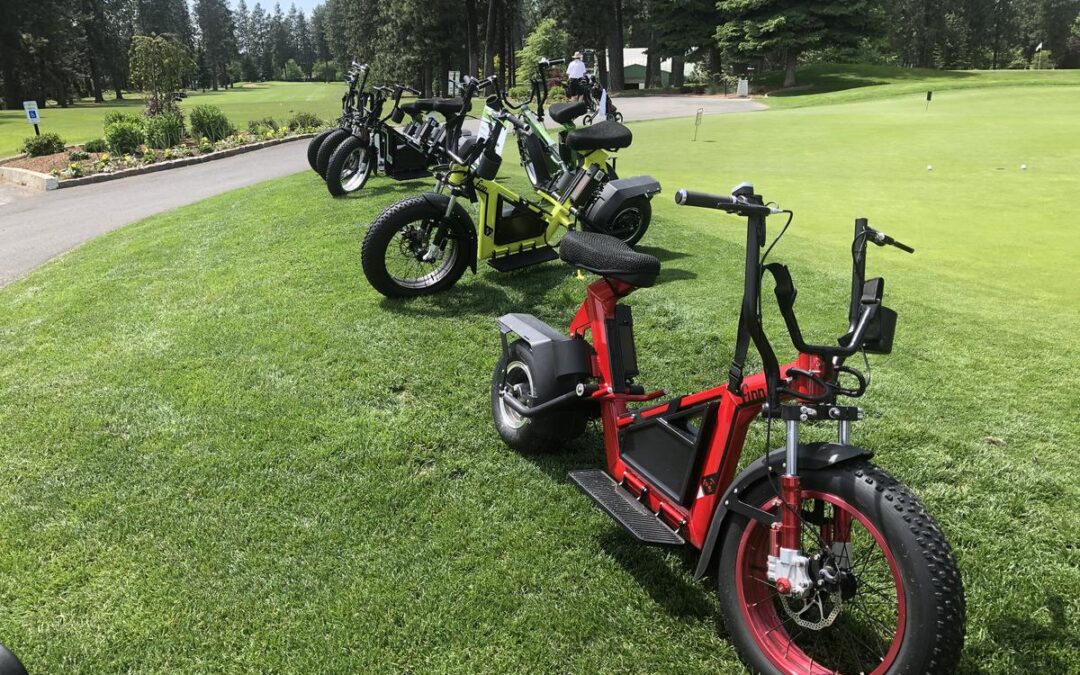 I haven’t been on a motorcycle since piloting a Virago 750 well over the speed limit in Western Washington when I was 19 years old.

There may have been a Moped or Vespa somewhere in the last three-plus decades, but it wasn’t enough of an experience to claim a spot in my memory.

After repeatedly seeing six Finn electric scooters stationed in front of the practice green at the Coeur d’Alene Golf Club, I knew it was only a matter of time before I strayed from my normal routine of walking nine holes.

So, on a pleasant Thursday afternoon I picked out a green-colored scooter, plopped my clubs along the center line, heeled the golf-club kickstand up and glided over to the first tee.

I played lousy, possibly the worst nine-hole score I’ve had in a few years, but the real bummer was not carving out enough time to ride in style for another nine or 18 – holes, not my scores.

And easy to operate. They’re lightweight at about 80 pounds so balance isn’t an issue. A thumb-activated throttle eases the scooter into motion. Top speed is roughly 15-17 mph but you can putter along and chat with a buddy on foot.

The hydraulic brakes are easily applied on the left and right side of the handlebar, similar to a bicycle. The scooter operates on a lithium battery and has a suspension system to help absorb uneven terrain. The tire pattern mimics those on course mowing machines.

Coolness factor: I was asked three times in nine holes not how I was playing, but how was the ride.

“I was very reluctant,” said MeadowWood pro Bob Scott, who bumped the course’s scooter selection from four last year to eight this season. “I turned 60 last year and the first 10 people we rented them to were older than me, and I thought I was getting them for the younger crowd.

“I have an 83-year-old guy who always rents half a cart. I told him, ‘Bob, you have to try this motorcycle.’ He’s like, ‘No way.’ He took it out and I’ve never seen him smile so much.”

Slow play is one of the biggest issues facing the golf industry. Courses lose revenue with customers growing weary of rounds pushing five hours – closer to six after factoring in commute and range time and the 19th hole.

Scooters, like carts, can help speed up pace of play. That was the impetus behind designing the scooters. It takes 7.5 minutes on average to play a hole, according to Sun Mountain Sports, which manufactures Finn scooters.

“I wouldn’t mind getting more,” Kallem said. “They seem to rent like crazy.”

To rent one, download the Finn App, watch a short video tutorial, provide payment and then scan the cycle’s bar code at the course. Pro shops aren’t involved in that part of the process.

“One of first days we had them last year I caught a guy coming in after his round and I wanted to get a little feedback,” Scott said. “He says, ‘I played crappy and I had a ball.’

“Literally in my 35 years I’ve never put as many smiles on people’s faces.”